Here are profiles of the Mayor and each Councillor-by-Ward. We’ll also be adding an i>elect Quarterly Report for each Councillor and the Mayor during this term so you can assess for yourself how each incumbent is performing against the i>elect 6 priorities, including their motions, their votes, and their comments. And, we’ll provide a summary i>elect Quarterly Report for Council. 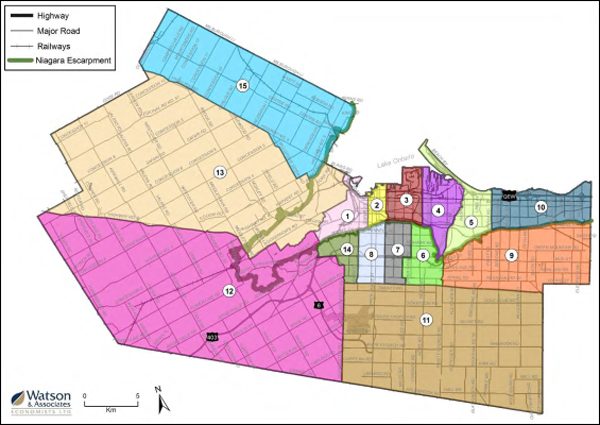 Also known as the Chedoke-Cootes area, Ward 1 is an urban ward, situated in the west end of Hamilton below the Niagara Escarpment (often referred to as the Mountain). 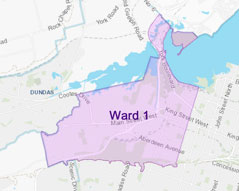 Also known as the Downtown area, Ward 2 is an urban ward situated in the centre of the city below the Niagara Escarpment (often referred to as the Mountain). Ward 2 is considered the City’s downtown and is home to City Hall, Jackson Square, Gore Park, First Ontario Centre, the Hamilton Farmer’s Market, St. Joseph’s Hospital, the Art Gallery of Hamilton and Hamilton Place. It’s Hamilton’s smallest ward and the north section of Ward 2 includes the Harbourfront and Pier 4 Parks, as well as the Hamilton Waterfront Trail which links Wards 1 and 2. 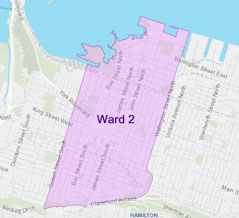 Also known as Hamilton Centre, Ward 3 is an urban ward situated in the lower city below the Niagara Escarpment (often referred to as the Mountain).

Approximately one third of this ward is comprised of industrial and commercial land including U.S. Steel Canada and ArcelorMittal Dofasco. It is also home to Hamilton General Hospital, St. Peter’s Hospital (both part of Hamilton Health Sciences), Tim Hortons Field and Gage Park. 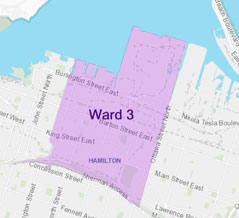 Also known as the East Hamilton area, Ward 4 is an urban ward situated in the lower city below the Niagara Escarpment (often referred to as the Mountain). Approximately one-third of this ward is comprised of industrial and commercial land including ArcelorMittal Dofasco.  Ward 4 is also home to the Centre on Barton, and the Pipeline Walkway. 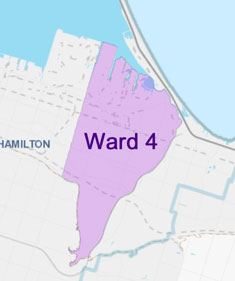 Located just east of the Redhill area, Ward 5 is an urban ward situated in the lower city below the Niagara Escarpment (often referred to as the Mountain).

The eastern ward boundary follows along Gray Road from the escarpment to Lake Ontario. Ward 5 also includes the beach strip up to the Canal Bridge and the ship canal which separates the cities of Hamilton and Burlington. It is also home to St. Joseph’s Community Health Centre, Eastgate Square, Battlefield Park, Confederation Park and King’s Forest. 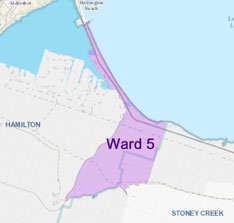 Also known as the East Mountain area, Ward 6 is primarily an urban ward situated in the east end of Hamilton on the Niagara Escarpment. Ward 6 runs along the north and east edge of the Escarpment.

It is divided by the Lincoln M. Alexander Parkway and includes the interchange with the Red Hill Valley Parkway. It has a pocket of light industrial and commercial land in the southeast corner and is home to the Mount Albion Conservation Area and Bernie Arbour Stadium. 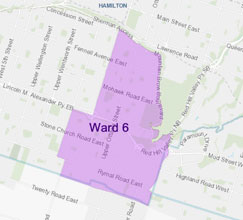 Also known as the Central Mountain area, Ward 7 is an urban ward, situated in the centre of Hamilton on the Niagara Escarpment.

The ward is divided by the Lincoln M. Alexander Parkway and is home to Limeridge Mall, the Sackville Hill Senior’s Centre, Sam Lawrence Park, Henderson General Hospital, and the Juravinski Cancer Centre (both part of Hamilton Health Sciences). 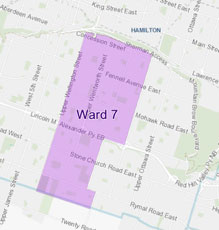 Located within the West/Central Mountain area, Ward 8 is an urban ward, situated in the west end of Hamilton on the Niagara Escarpment. 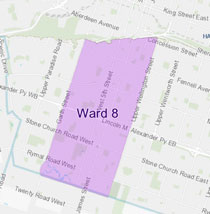 Known as Upper Stoney Creek, Ward 9 sits above the escarpment.

Home to Heritage Green Sports Park, the Eramosa Karst region and Felker’s Falls Conservation area among other locations of interest. Upper Centennial Parkway divides Ward 9 from its urban and rural portions, which are approximately 19% and 81% in land area respectively. 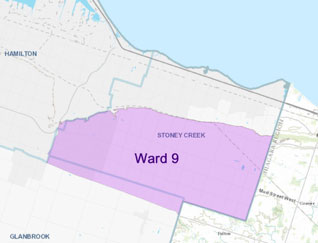 Also known as the Lower Stoney Creek area, Ward 10 is primarily an urban ward situated below the Niagara Escarpment with an industrial and commercial corridor south of the Queen Elizabeth Way.

Home to Mohawk College STARRT Institute and a section of the Hamilton Waterfront Trail. 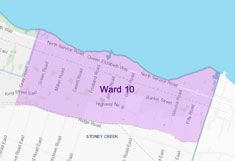 Ward 11 is generally comprised of the municipality of Glanbrook.

Home to Lake Niapenco, the Binbrook Conservation Area, and the John C. Munro Hamilton International Airport.  It is also home to two major residential settlement areas, including Mount Hope and Binbrook, and is approximately 90% rural in area. 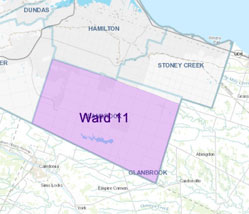 Home to Redeemer University College, as well as part of the Dundas Valley Conservation Area.

There are several small to medium commercial and light industrial sections, including the Meadowlands Power Centre and the Ancaster Business Park. It is also home to several rural settlements including Copetown, Sheffield, Lynden and Jerseyville. 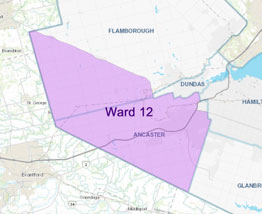 Ward 13 includes primarily the Community of Dundas is an urban and rural ward comprised of the former Town of Dundas. There was a substantial expansion for Ward 13 which extended into a large rural portion of Flamborough, extending from Greensville to the city limits. It is situated in the Dundas Valley.

Home to the African Lion Safari, Westfield Heritage Village, Dundas Valley School of Art, the Dundas Valley Conservation Area, a large section of the Royal Botanical Gardens, and Cootes Paradise.  It is also home to several rural settlement areas such as Freelton, Kirkwall, Rockton and Greensville. 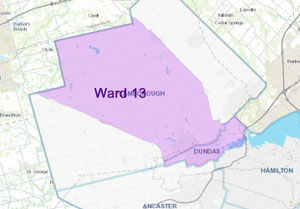 Ward 14 is located in the western portion of the Hamilton Mountain.

Almost 1/2 of Ward 14 is comprised of residential lands, while another substantial percentage is made up of parks and open spaces. 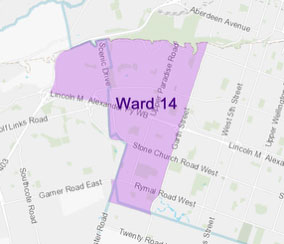 Ward 15, also known as the Flamborough East area is primarily a rural ward but includes some light industrial and commercial land as well as the urban area of Waterdown.

Home to Carlisle rural settlement area. Waterdown is considered one of the fastest growing residential areas in Hamilton. 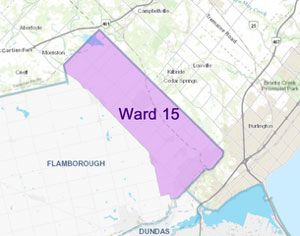